The Archive of Market and Social Research

Boozing with the boys – an increasing minority think it’s acceptable

Most people disapprove of heavy drinking sessions, but there’s an increasing minority who think it’s part of life.

The levels of agreement in 1999 and 2019 to the attitude statement “a real man can down several pints of beer at one sitting” in Kantar’s TGI study tell of increasing tolerance towards heavy beer drinking as a proof of machismo.

A clear majority of GB adults reject the notion, although slightly less vehemently today than 20 years ago.  57% disagree now compared to 59% in 1999, although there’s a bigger drop in the percentage disagreeing strongly: that’s down to 38% from 45%.

But the minority who agree has almost doubled in size from 7% to 12%.  The bulk of the growth is among those who agree mildly rather than strongly, but the shift in attitudes is apparent. 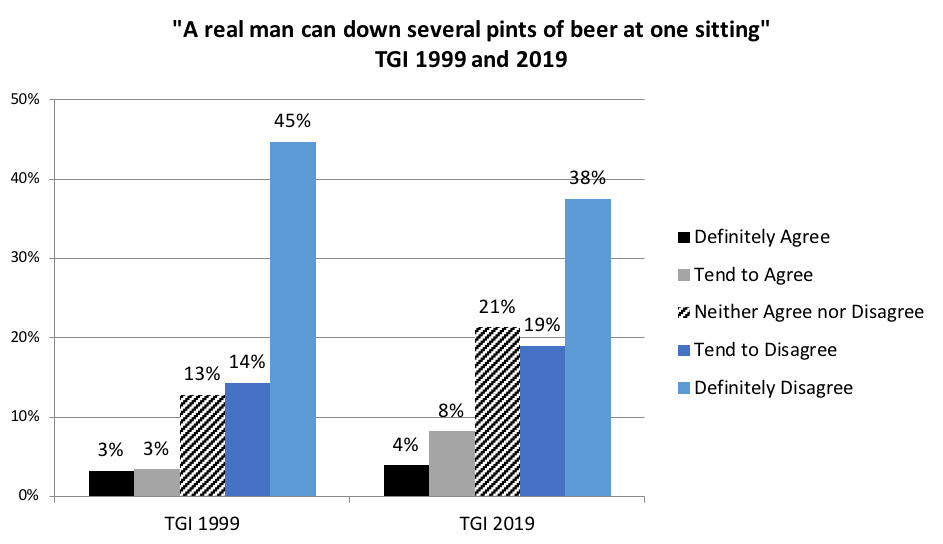 The change is more striking in some demographic groups than others.  Overall, the index of increase is 183.  The growth is a little higher among men (index 199) than women (index 160), but it’s among age and social grade groups that it’s most pronounced.

It seems to be those more likely to evidence the behaviour – males from the professional classes and in the young or mid-range age groups – who are more likely also to be accepting of it. 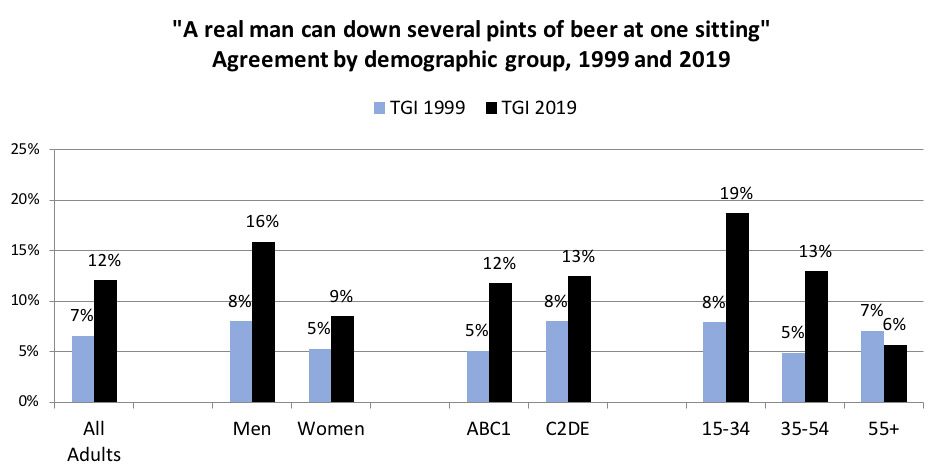 While such an attitude prevails among elements of the population – and certain groups in particular – despite the disapproval of the majority, the minority binge-drinking culture will remain.

TGI (Target Group Index) is a continuous survey which has been carried out in Great Britain since 1969, based on 25,000 adults per annum, who provide information on their use of all major products, brands and services.  Media exposure, attitudinal and demographic data are also included.  Kantar, who own and operate the TGI (Target Group Index), are making major donations of data to AMSR.

To explore the TGI archive within AMSR, click here. (This link to the archive contents will open as a separate page)